Having chosen a starting point, I had planned to continue down the shelves, library-style; books in their groupings. Instead it was suggested that I go across to mix things up a bit. I like the idea. 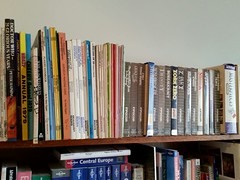 Two of my favourite comics growing up, along with Asterix and Tintin, were The Wizard of Id and Captain America. I have collected many compendiums of the Wizard, mainly though secondhand shops, most are rather tatty. I have some nice editions of Cap that appear on a shelf elsewhere. There is perhaps a certain irony in the pairing of Cap and the Wizard.

I first got into computing in 1981 and with my second computer in 1984 (Commodore 64) I discovered Infocom and the delights of text adventuring, or interactive fiction is it later became known. I eventually collected all their games, as well as those of Level 9 and Magnetic Scrolls. I used to buy UK computer magazines purely to read their section on text adventures. Though I haven’t played any in years, I usually have the Infocom suite on at least one of my computers.

2 thoughts on “shelf by shelf 2 #blogjune”