snail. A name I call myself…I’lll stop there lest I sing out loud.

I realised on Sunday that it’s probably been 25 years since I started calling myself snail, initially online and later offline. I think I started using it in 1989 and I’ve been online since I discovered electronic bulletin boards (Adventurer’s Realm, Viatel) in 1984…connecting via the wonderful tones of the 1200/75 baud modem that plugged into the cartridge port of my Commodore 64.

I tend to prefer being called “snail” in person though some prefer to use my real name “Sean”. At work, I’ve always defaulted to “Sean” but occasionally wonder whether it’s something I should, or could, change. I remain ever flexible. 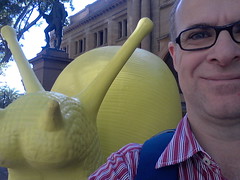 There’s big restructures at work (State Library of NSW) and I have recently had to apply for my own position; or rather an updated version of my position. In happy news I have made it through and as of Friday, my job title will change from “Online & Licensing Librarian” to “Online Resources Specialist Librarian”. I first got this job 2 years ago and I s’pose it’s something of an affirming experience that I have been successful in retaining it.

I first worked as a contractor for SLNSW around 10-12 years ago and while I did and learnt lots, always felt I hadn’t quite got the hang of the place. I seem to be doing better this time round, some of the time at least. I used to travel around NSW training librarians in how to search online. In the intervening years, I was an electronic solutions consultant on the vendor side. Best job I ever had and I loved it much. 7 years was enough and a good time to move on. Prior to that I was part of the reference team at Bankstown Public Library and have also worked in the NSW Parliamentary Library and a big law firm.

I’ve been blogging on one platform or another (previous versions were handcoded) for more years than I can remember and my posting has become, #blogjune aside, increasingly erratic. That’s ok, it’s still my space; I have other spaces too.