A while back I commented on how much I was loving my new nexus; I’m happy to report that this remains true. Mostly. I’ve discovered one issue and this relates to an app rather than the device. Last year my partner bought me a subscription to National Geographic Traveler covering both print and digital. Unfortunately, it turns out that their version of digital requires an iPad and does not work on android or indeed other non apple devices as far as I can tell. After a fruitless round of discussion with their tech support I gave up and the print version at least has been rather nice.

During that discussion, they mentioned that I could get a digital copy via the zinio app which is available for android. However I would have to buy a second subscription as they couldn’t transfer my already purchased digital subscription over. So I downloaded zinio and never added anything but they still sent me regular promo emails.

One such email offered 40% off subscriptions so I thought why not and took out a sub to Traveler and one to Popular Science Australia. These have been quite nice though based on a sort of fancy PDF approach as far as I can tell. I’ve compared the zinio version of Traveler with the ipad version and they look and behave the same. Of course, I later discovered that some public libraries offer magazines via zinio too and I probably could have gotten the same content through my library membership.

As it’s a PDF-like approach, it doesn’t play nicely with smaller screens. The page enlarges easily enough but, as with a PDF, you need to move the page around as you’re reading to get all the content. It doesn’t easily adjust the flow of the enlarged article for the smaller screen size. I’ve otherwise been happy with the idea of magazine digital subs for some content, though I haven’t bought/read a magazine in many years. 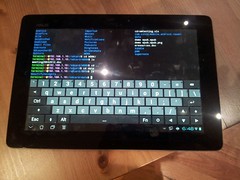 I am actually considering picking up a cheap, larger tablet just for reading magazines. I used to have a 10″ tablet as part of my transformer prime however I’ve passed that on to a friend who is making good use of it. In some respects the idea of buying yet another device for reading seems a little wrong, especially as I already have:

all of which are used regularly. Yet none feel quite right for reading larger items casually.