From computer science to science fiction. In my 20s, when I had little money, I used to haunt the second hand bookshops, 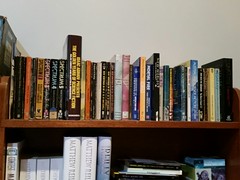 particularly Ashwood’s, in the Sydney CBD, looking for cheap SF books. Most of the cheap stuff was from the golden age of SF and generally the mid 20th Century. I read a lot of short stories, practically devouring them one after the other. Lots of Asimov and Dick and Pohl and so on. These days I don’t seem to read much in the way of short fiction, nor SF per se, tending toward a mix of fantasy, literature and non fiction. Curiously, most of my short story reading was in the “best of” annuals, such as Spectrum, as I didn’t buy a great many of the monthly magazines. I do recall having a few early issues of Aurealis at least.

I think I first got in to science fiction toward the end of primary school; I read somewhere that 12 is supposedly a “golden age” of sorts too – for discovering science fiction. The crucial story was called “Dark They Were and Golden Eyed” by Ray Bradbury and was one of many stories he wrote connected with his series The Martian Chronicles. I was later successful in acquiring a nice edition that brought all the connected stories together.