Finally made it to filmfest: 3 films, 3 countries, 3 cinemas. It was fun.

We started at the Dendy Quays to see a Chinese film, Dancing in the Room, which I really enjoyed. It flowed nicely along with a sense of alienation in the big city, yet maintaining a gentle friendliness, albeit a little stylish for its own good. Late in the piece it took a sharp turn that seemed almost David Lynch inspired and then settled back into the its earlier flow. I figure there was probably 3 possible spots to end it, each resulting in a different sort of film. A good, strong start to my festival. 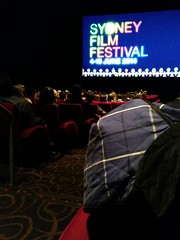 From there, we popped on the train back to Town Hall to catch a Swedish movie, We Are The Best!, at the George St Cinemas. A tale of 13 year old girls forming a punk band was deftly handled with the film never forgetting their age. It had a fine balance to that sense of childhood and fitting in, or not.

From there we strolled across, via dinner, to finish off at the State, in fact I think this is the only film we have booked at the State Theatre. I caught up a little (time was too, too short) with the people I normally sit with, who were all a little shocked that I didn’t appear in my usual seat. Will hopefully catch up for a drink with them later in festival. I miss them.

Final film of the evening, Begin Again, was from the US. It tried a little too hard to be “hipster authentic” but was otherwise well done. It played effectively with multiple perspectives and flowed comfortably back and forth along the main time stream, but didn’t go overboard. Lots of good music and plenty of singing, in that indie sort of way. I enjoyed it.