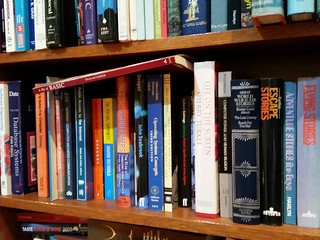 Some programming and computer science stuff that segues into HCI (Human Computer Interaction) and finishing off with some adventure stories. I daresay you could create something interesting around that particular flow. I recall mum buying “A Bit of Basic” for me either in 1981 or 82 and it was the last in the shop, Dick Smith in Bankstown Square. Another kid wanted it too but I’d grabbed it first. In 1981, I was in my first year of high school, and partway through the year, my school bought its first computer, through the P&C Association, an Apple II. A couple of friends and myself used to get to school around 7-7.30am with the hope that the cleaners would let us into the room where it was kept so we could teach ourselves to program BASIC. Some days we got in really early, others not at all.

Later at Uni, I studied a mix of computing science, psychology and philosophy and was very curious about developments in the way humans interacted with computers and developments in the field of artificial intelligence. I was rather chuffed when I came across a copy of Weizenbaum’s key work “Computer Power and Human Reason” in a secondhand store. Hidden away next to Rheingold’s ‘The Virtual Community” is the seminal “Hackers: Heroes of the Computer Revolution” by Steven Levy. I remember devouring the book while studying computer science at uni, hanging on every anecdote from the early days of coding.