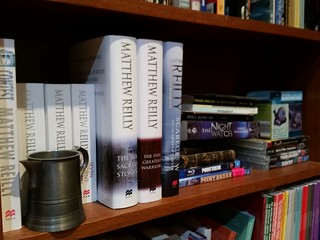 I think this shelf answers the question of whether I have clutter on my shelves :-)

One thing I try to do in some spots is leave space for expansion, however all the space here suggests I may have done some weeding. I suspect I’ve probably tossed Robert Ludlum’s stuff and a couple of other writers of similar vein. Matthew Reilly seems to have hit just the right spot with me in a way that Dan Brown completely failed to do. Reilly’s last book “The Tournament” I have in e and not p, though I wasn’t particularly keen on that one. Otherwise, his action adventures have all been fab.

Two copies of Point Break could be seen as excessive but I lovez it so, plus I decided to get the bluray version when it was cheap. I loved both the recent Tomb Raider on the PS3 and Far Cry 3. The last God of War was ok but hasn’t really grabbed me as much as earlier releases. Then there is the snail shaped garden light. The downside of everyone knowing my nickname is “snail” means that at birthdays and christmas, people who don’t me well tend to try and find snail things. Some friends and family are very good at it, some not so much. With that said, I think I have access to a garden these days where I may be able to place the light.