Well some stuff, some bits and even a rock. A shiny rock. I can’t quite remember the origins of the rock though I’ve had it since I was a child. It’s not a particularly pretty rock but it does have lots of flecks of shiny, mirror-like bits. Maybe I found it in the bush, or at school or perhaps someone gave it to me. I’ve had it since I was very young. 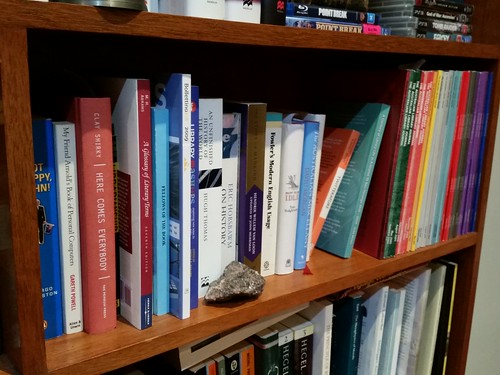 At the far end of the shelf to the right, I have several years worth of the Australian Library Journal. I still need to add a couple of the recent editions to the shelf and I think the latest edition arrived in the last week. A few years ago I tried to track down a full set in print but didn’t have much luck. I always meant to hunt around some more but there always seems to be other books to pursue. Alongside the journals is a history of LIANZA I picked up at their annual conference a few years ago.

Also on the shelf is an old, old memory: Gareth Powell’s “My Friend Arnold’s Book of Personal Computers“. Many, many years ago in the 80s, Gareth Powell used to edit the computer section in the SMH. He’d actually been the travel editor or writer and somehow moved from there into computers. Lots of computer folk hated him as he was never sufficiently techie nor especially precise. I loved him as he knew how to write and was always throwing in cute affectations “…down in the potting shed I call my office..” and such. His approach was all about being accessible and interesting, and he was willing to take the piss out of himself. Around that time, he put out on a book on how to use computers for folk who didn’t know much about them…like his fictional friend Arnold. I picked up it a copy secondhand a few years ago.