This morning I sat in on an introductory ebook session at work. The session was comprehensive and covered tablets/ereaders/desktops not to mention OS divides eg apple vs android. I had to help someone with an ipad and realised very quickly that it has been some years since I last used one. Consequently I found it a struggle and the screen confusing. I realised later that there was no obvious back button and that I was utterly snared in the android world for phone and tablet stuff.

I recall at a conference a year or so back allowing a friend to play with my old Asus Transformer Prime tablet. They were a dyed in the wool ipad user and kept trying to do things on the Prime that would have made sense on the ipad. They got a wee bit frustrated, as did I as I couldn’t figure out why they would want to perform some particular action. This morning it was my turn for frustration as I struggled to go back to a previous screen, look at a list running apps and so forth. The ipad only had a single home key, whereas android has 3 keys. Long pressing the ipad’s home button didn’t seem to do anything either. 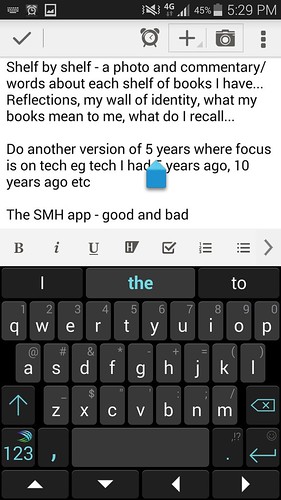 It seemed very easy to make mistakes on the ipad and it took longer to do a full reboot than my current nexus tablet. I didn’t get a chance to try out any typing beyond the default set up as I recall having issues with that a few years ago. Ultimately it was my frustration with typing and text editing on the early ipads that eventually drove me to android at all. My memory of the ipad is that you’re stuck with the provided keyboard, though I’d like to think this has changed. Whereas one of the selling points of android is being able to change the keyboard, not to mention having a cursor key.

As you can see from the screenshot (taken from android’s phone version), along the bottom are arrow keys for moving the cursor around the text for precise editing. As for the keyboard itself, I’ve installed the paid version of Swiftkey, with the flow function enabled. This includes good text prediction as well as the ability to “swipe” a trail for each word rather than typing individual letters. Prior to discovering Swiftkey, I used to use the Hacker’s Keyboard, and Swype. Both are still good but for me, Swiftkey has become my preferred option.