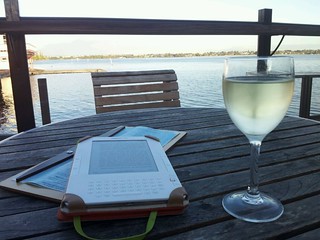 Here we are, the end of June and thankfully not quite the end of days. I just did a quick tally of my performance over the years for #blogjune:

Hmmm…I think I’ll try and squeeze out another shelf by shelf tonight to make the 30. The first #blogjune, in 2010, was pretty special but they’ve all been fun, and last year was just the wrong sort of year for me.

I haven’t been as engaged myself in commenting on other people’s stuff though. I wonder if that reflects that outside of June, I am blogging little and barely reading blogs. In 2010, I voraciously read everything, and had done so for years. The last few years I seem to read a lot less; the last year or so I have been somewhat absent while dealing with life stuff. I’ve gone through a period of massive change regarding how I deal with online spaces. I no longer spend all my evenings at the computer at home; I have other people in my life now, and do other things.

I have discovered that there are activities beyond the screen…I even play board games. Often! I’ll blog another day on that one. Speaking of which, I managed to start #blogjune with something of a blogging plan in evernote, to which I added ideas as I thought of them. A bunch of those ideas are as yet unwritten. Hopefully I can continue to blog, though in not quite so hectic fashion. My experience from previous years informs me that I shouldn’t be too optimistic about future blogging practices. 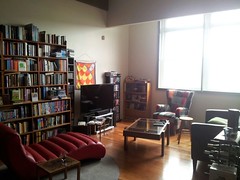 The shelf by shelf posts will continue as they’ve been good for me, and a way of developing a visual record of what I have. It’s been fun revisiting shelves and remembering things; recording old anecdotes on connections and histories and memories. I don’t live in that space as much as I used to and I miss my books the most.