Growing up I loved war stories and escapism generally…unsurprising given all the Biggles’ books I have. One of my favourite movies growing up was “The Great Escape” which was based on a book by Paul Brickhill. I have it, as well the biography of Jerry Sage, simply titled “Sage”. Steve McQueen’s character in the movie, Hilts, took some inspiration from Sage, though wikipedia suggests another pilot and doesn’t refer to Sage at all. I found Sage’s book an engrossing read and Sage himself a fascinating character. 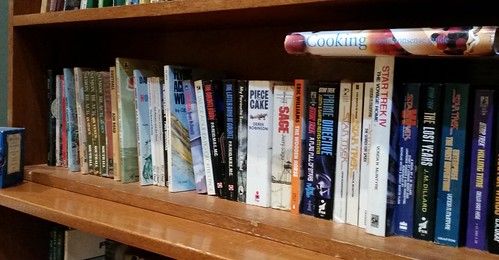 My other favourite destination for stories about WWII is P.R. Reid’s The Colditz Story and its sequel, The Latter Days at Colditz. The Great Escape was set in a camp, however Colditz was a castle. I don’t recall if I watched the TV series first or read the books. I recall finding the first book in a box at my grandmother’s place. I think it was actually one of dad’s old books but I’m not entirely sure these days.

Nestled away at the far end of the shelf are the books by Ivan Southall, particularly several in his “Simon Black” series. I think Southall was one of my favourite Australian writers growing up, along with Patricia Wrightson. I don’t think I ever read anything by Colin Thiele, though I did see the film of “Storm Boy” as a child. At the right end of the shelf are the all the Star Trek books I owned. I enjoyed the novelisations of several of movies as well as a few others. I’m a bit old school and really only watched the original series. I tried to get into Nextgen when it started and gave up after 2-3 seasons. Friends assure me it got better with 4th season. I’ve also loved the recent movies that have rebooted the show.