On holidays this week and have been catching up on some reading. Starting with Age of Ultron (Avengers) on the weekend and a little halfway through Unruly Places: Lost Spaces, Secret Cities, and Other Inscrutable Geographies. The former was ok but not great and was read more in the vein of prep reading for the forthcoming movie. It also fits in with my continuing collecting of Captain America omnibuses of which I have many. 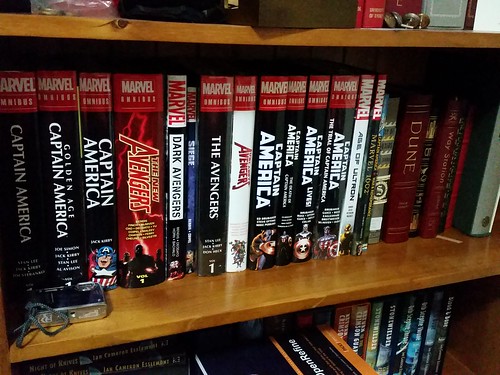 Unruly Places channels into an itinerant fascination of mine for lost or mysterious places; some real, some less so. It’s a curiousity that falls well short of conspiracy theories of lost empires yet at the same time overlaps. An earlier book I dip into every so often along such lines is Atlas of Remote Islands by Judith Schalansky, an exploration of 50 little islands scattered about the place.

Diverting back to fiction, I’ve read the first book in a trilogy by Lev Grossman called The Magicans, sort of a darker version of Harry Potter and indeed it references Potter here and there. Not a bad read though it dragged a little in the middle, looking forward to reading the second book.

While buying the e version of that, I happened to look up another book of similar title, Magician by Raymond E. Feist and found that the e version was available for a mere 7 bucks. I remember loving this book and used to return to favourite sections over the years. The advantage of print is browsibility and that casual sort of scan across multiple pages that I’ve never quite managed in electronic versions. So I bought the electronic and within a day am well into it; it sucked me in again from the opening pages. There’s something about Feist’s writing that immediately captures and the flow of his story-telling is a little like cuddling up in my favourite doona.

Many, many years ago when I lived in Bankstown there was a chain of bookshops called Grahames, of which there was a store in Bankstown Square managed by John and Sue. John knew the sorts of books I liked to read as I bought much of my early SF there. I discovered Galaxy in the city later. John had heard there was a new edition of Magician coming out, the author’s preferred edition. While acknowledging that fantasy wasn’t really my fare, John strongly recommended it. Even though I was on the dole at the time, I pre-ordered it on lay-buy, and the following 3 books, all of which were being published afresh to coincide with the new edition of Magician.

The tricky bit was that I was unemployed and on the dole at the time. John was happy for me to pay them off in small sums over a much longer period than usual. Clearly, he was experienced in managing addictions :-) Where it got tricky is that they arrived out of order and two of the other books arrived before the first. When the first arrived, I convinced John to let me have it, though I hadn’t paid off the full lay-buy. I read it, loved it and was utterly entranced. I managed to pay off enough to cover the cost of the second and again convinced John to split the lay-buy and let me have it. And so on.