Targeted advertising: sometimes I love it, sometimes I hate it, sometimes I both love and hate it at the same time. Was just on facebook and “scored” an ad for a new edition of Dick’s The Man in the House Castle by The Folio Society. I used to love Folio Society editions and have quite a few. Dad used to be a member and I inherited some of those and have picked up more of my own in second hand bookshops both here, in London and in the famous book town in Wales, Hay-On-Wye. I’ve never actually joined myself and they always had an odd, regional based approach to pricing eg it was more expensive to order the same book from the UK, not including postage, as an Australian than as an American or English. 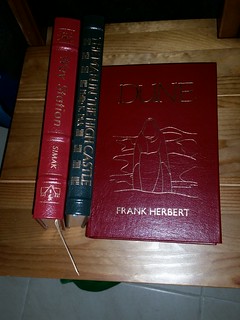 Dunno where that’s at these days but the prices do seem a little better. Looks like they even have a bunch of SF books. Which brings me back to Man in the High Castle. It looks nice and isn’t too expensive. On the other hand, as you can see from the photo, I already have a nice edition of it from Easton Press in the US. Still a little tempted, and I may well add it to a general order as I’d quite like their set of Asimov’s Foundation Trilogy. I loved the Foundation books and have ageing, smelly paperbacks of them, purchased no doubt from the SF piles at Ashwood’s in the late 80s.

Thankfully I already have an extremely nice edition of Bradbury’s Martian Chronicles from Subterranean Press so have no problems passing on the Folio Society edition. I do have a cheaper leatherbound edition of the first 4 Hitchhiker’s books and would like nice editions of them someday. I missed on their first print run of Dune, which does look quite spectacular, on the other hand it is $150 and the Easton Press version is very nice too.

1 thought on “bit of a sucker”