One of the tasks that I have been putting off for a long, long, long time is sorting out all my photos. I did some of the job a few years ago and winnowed out the duplicates and reducing my photo archive from around 25 odd gig to about 6 gig if I recall. I also need to add a lot more photos to my public space on flickr, which apart from the occasional upload from the phone has been almost nonexistent. I have a few local holidays to add and I’m sure there’s at least one European trip I haven’t documented via flickr.

My photo archive is stored on my ageing mac pro, managed with iphoto, and backed up to the NAS. As the development of both has halted I had been wondering whether to upgrade to better options or fudge on. The mac itself still runs beautifully and is quick enough for my needs. I wouldn’t mind some better software and had initially considered Aperture (now discontinued) but think if I go down that path I’ll probably get Adobe’s Lightroom. However Lightroom is mostly sold as a sub these days ($10/month) and not so much as a standalone package. I’m undecided on this though am curious around the potential of running it on my various machines and devices. Running on stationary computer and mobile gadgets is only available via the subscription path. 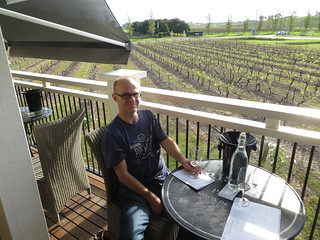 For now at least, iPhoto continues to suffice. I’ve just finished loading all remaining photos from the multitude of SD cards I have accumulated, including this photo from my Hunter trip last year. Unfortunately the mac is not recognising my samsung galaxy s5 phone though it used to recognise the s2. I suspect I’ll need to transfer the files to my windows lappy, from there on to a USB and then on to the mac and into iPhoto. Now that I think about it, I have to do that anyway as my phone archive is stored on the laptop. I could also do the transfer from the lappy straight to the mac via the NAS but suspect sneakernet will be faster and more efficient. I will never escape format wars.