I dug out an old friend last night, the Psion 5mx, and can happily report that it still works. I bought this back in 1999 on my first trip overseas. I borrowed $10k from my dad which I mostly used to spend 4 months backpacking around the world. Mostly. About $1,000 of it was spent on the psion 5mx which was released shortly after I arrived in the UK. 16 years later and it’s still amazing: light, portable, around 19 hours battery life, and packing a full computer. Some even ported linux to it. It remains an impressive piece of engineering, particularly with a keyboard that, while small, was still comfortable to use. It even had a touch screen with a stylus that locked into the case. For me, this was the height of portable computing. Connectivity was either cable or infrared and I used to use the infrared connection to connect to a mobile which in turn, I used to for dial up internet. With that, admittedly clunky, setup I was able to live blog conferences many moons ago. 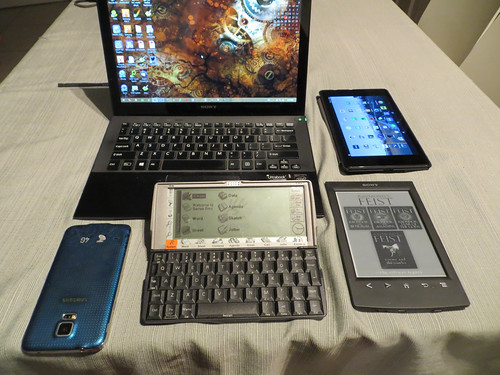 These days, I have all the power of a reasonable computer in my mobile phone, which is not much smaller than the psion. A little lighter but not much lighter. The psion is smaller than my 7″ nexus tablet and 6″ sony ereader, but thicker. It is dwarfed by my 11″ vaio laptop, which in turn is only 2.5 times heavier. I’ve had the vaio for two years and it still impresses me, there’s not much on the market that can really match it. Those few that can are usually heavier than the vaio’s 800g.

The vaio is my main machine these days, with the mac pro tower mostly gathering dust though I’m currently using it again to manage my photos…and play angband. The tablet is great for casual reading, newspapers, a tad small but bearable for magazines, and general browsing. I use it for reading occasionally but prefer the dedicated ereader. The ereader is super light and I can comfortably hold it in my hand for as long a I need, whereas the tablet was a touch heavy. As all my devices are so light, I tend to have most with me most of the time. My work bag has the vaio, tablet and ereader. The phone is always in my pocket. On weekends, I change over to a satchel and usually have at least the ereader, and sometimes the tablet.

Interestingly, you can still buy the psion 5mx.