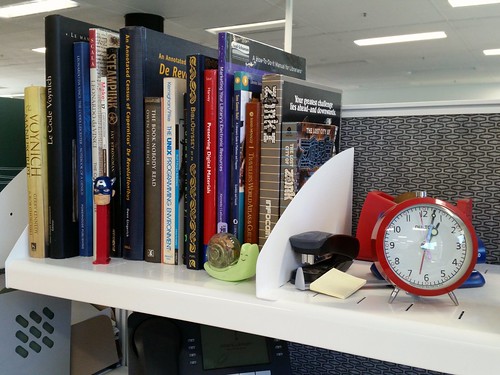 I’m one of those people who likes to have lots of personal things in my work space, dotted about. Things I can glance at and know I’m in my space. Mostly that means books and pictures; the pictures tend to be arty postcards and I don’t have photos of my partner and kids. For a while, when I was living across two houses with my partner I missed my books quite a bit. So I set up a shelf at work of some of my favourites.

On the left of the bookcase are a couple of books on the Voynich including a full facsimile, Le Code Voynich. Last year I think, I ordered an even nicer facsimile of the Voynich. Sitting next to them is a couple of museum guides to the Codex Leicester, also known as the Hammer Codex, by Leonardo Da Vinci. The original was bought at auction for 30 million USD by Bill Gates and he has occasionally lent it out to museums. The two guides include images of many of the pages and accompanying essays. Having liked the leather Voynich facsimile, I have recently ordered a facsimile of the Codex Leicester to go with it.

There’s also some stuff on Copernicus and steampunk, amongst other things. Pride of place on the right goes to Infocom including the full box for the Amiga version of Zork I and the paperback edition of The Lost City of Zork. Everyone should have a PEZ dispenser for their favourite superhero :) To the right of my screen, are a mix of postcards and posters, starting with a Smart image and come to think of it ending with a Smart image as well. There is a fold out poster of the Apple IIe keyboard which I picked somewhere or other. The first computer I learnt programming on was an Apple II so I’ve long had a soft spot for them. 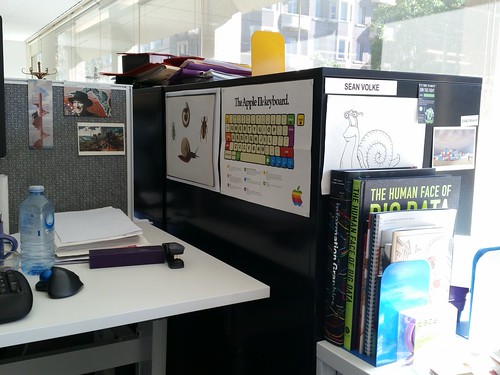